¨Beyond the wildcatś plundering quest,
for swift and easy as a bird

it mounts, and scarce a leaf is stirr´d
It runs, it flies, it springs, it leaps,
As graceful as the antelope,
yet cruel as the tiger grim….¨ – Isaac Mclellan

It was definitely a week for the Feline species. From relaxing sightings of the rare African Wildcat, to the lion cubs getting up to shenanigans again. Maybe, it was the amazing reddish full moon that set their blood on fire. The week started off with the lions joining our guests for an early morning breakfast. Just imagine seeing these magnificent cats the first thing once you arrive at the lodge!

Several times, during the afternoon activities, on the way back to the lodge, our guide, Knowledge, spotted the elusive African Wildcat. Mostly, curled up in a tree, or just starting to venture out for a midnight feast…

It was time for our guests to have a feast of their own, however, much earlier. But, they were surprised that they did not have a private dinner. A Serval joined in on the excitement, although from a distance. One night, the one male lion, nicknamed ¨Blondie¨, due to his light coloured mane in comparison with the other Kalahari Lions, also decided to show up. And then the best, that a lot of our guests have been dreaming to see, the very elusive Brown Hyena!

In the morning, we discovered that there was another visitor in camp, the night before. Unfortunately, this special spotted visitor, the leopard, is still a bit shy around people, so prefer to come when everyone is soundly asleep. Hopefully soon he will start to become accustomed to us, and our guests will be treated even more!!!

Something, very special, came to our attention as well. It is adorable to watch! The resident Porcupine and Honey Badger had decided to get over their feuds, and were enjoying dinner side by side at night. The Honey Badger was so relaxed, he even laid flat on his belly with legs stretched out, while enjoying a scrumptious meal.

There had been so many animals, coming to the lodge during the mid mornings and afternoons. Enlightenment was created with sights of the Zebra, Blue Wildebeest, Impala, Kudu, Red-Hartebeest, Oryx (Gemsbok) and Elephants.

The safari activity this morning concluded the week with the funniest experience! Somewhere, on the property, the lion cubs got hold of a cushion. They started to practice their majestic, ferocious hunting skills on the poor cushion and the white soul of it blew away with the wind.

When you have acquired the taste for the Kalahari dust, you will be hooked for life. You will yearn for the setting moon, while the Jackal bark and you know they are close by in the dark. Set your heart and soul free over the flowing sand dunes and let the wind blow away all the sorrows and worries.

Deception Valley Conservancy is waiting for you – Come!!

Have a lovely week 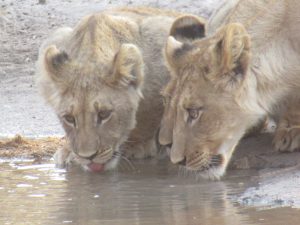