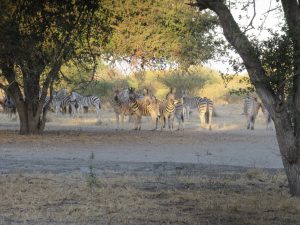 ¨Christmas is forever,
not just for one day.
Its for loving, for sharing, for giving…
Not to be put away like bells,
lights and tinsel…
The good you do for others,
is the good you do for yourself...¨ – Norman Wesley Brooks

Ever had such a wonderful experience, that you are simply just speechless? There are just not enough words to describe it, and you want to relive that incredible moment forever. Luckily, most of us had such an experience or a few of them in our lives. The things that happened and that is still happening at Deception Valley Conservancy during July, are simply a breathtaking experience, and a perfect example that Christmas happens all year around!

Honestly, I am not sure where to begin… With the natural waterholes all dried up, the animals are visiting and spending most of their time around the designated pans on the conservancy. Every day we either pump water into these pans, or fill them up with water taken by a truck. Water is a critical resource during the dry season in the Kalahari, and it is our duty to take utmost care of all fauna on the conservancy by making sure they have adequate water. The last pan that dried up was our famous Toti-Toti pan. With the heavy rains we had, the original pan was completely drenched with thick mud. One lovely afternoon we went there to clean out the pan. The Kudus that were watching us, probably thought that we were mimicking warthogs wallowing. It was a muddy affair indeed, hard work, but extreme fun! Who needs to pay for a mud-treatment in a Spa when you can get a full body type out in the bush? The tremendous warm and happy feeling that fills you when helping others is incredible! In this case we helped the animals, to make sure the pan could not only hold a greater amount of water, but would also be much cleaner. The animals are after all the celebrities of the conservancy! 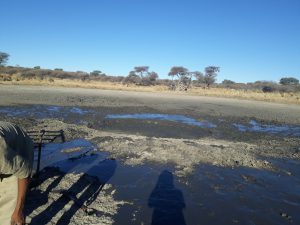 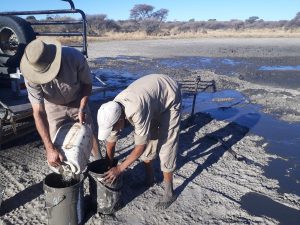 The waterbodies are teaming with wildlife. At the Main Lodge there are plenty of Zebras, Kudus, Blue Wildebeests, Impalas, and many more. Also Honey Badger, Caracal and Serval were spotted. Birdlife is simply out of this world! Especially with the Red-billed Queleas and Namaqua Sandgrouses. You would not believe it, until you see it with your own eyes.

At the northern sector, there is a waterbody that hosts a tremendous amount of Queleas. The Red-billed Quelea is often said to be world´s most numerous bird. Dry-season flocks may even number millions that feed, drink and roost communally. When feeding or drinking, ¨roller feeding¨ becomes apparent where birds at the back of the flock constantly leapfrog the front-runners in order to get a share of the seed or water. On the cold winter mornings, they will huddle on exposed branches to sunbathe. So many, that quite often they break the branches! 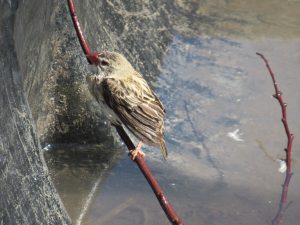 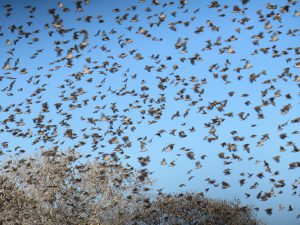 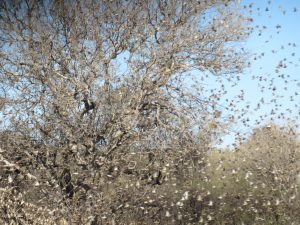 At Toti-Toti Pan the Namaqua Sandgrouses steal the show. This is a nomadic specie that mainly flies to water two hours after sunrise. Thick underdown in the plumage helps with insulation against the extreme temperatures found in the Kalahari. They are well known for their habit of carrying water to the chicks at the nest. This they do with specially adapted feathers of the belly and lower breast that hold water on the inner surface by capillary action. They are reliant and dependent on surface water, to which they will fly long distances daily. They also have a salt gland to purge excess salt, which acts as a water-saving mechanism. 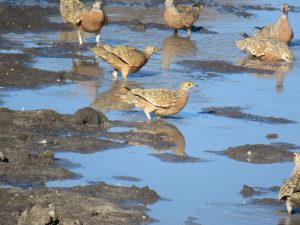 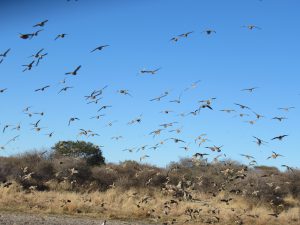 Late one Sunday afternoon, we got another surprise in the North. After being absent for a while, our resident male, Blondie, and his brother decided to make a glorious appearance. Unfortunately, the brother was a bit camera shy and moved into thick bush, but as always Blondie never ceased to amaze and did not mind showing off his majestic handsomeness. Also, we had terrific news that the pregnant lioness from a while back, gave birth to 3 healthy cubs. Our neighbours had a quick glance of her one night, however, at the moment she is still very careful of revealing her cubs. 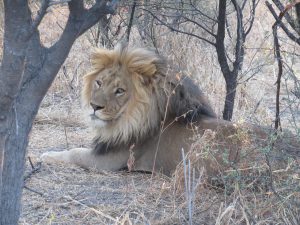 Finally, the Christmas Eve of July happened two days back. I came back from an early morning patrol on the Conservancy. Unfortunately, on our airstrip was a dead Blue Wildebeest. We were raffled for a bit, as it wasn’t caught by a predator. Later it came to our attention that it was most likely a snake bite that landed him in the unfortunate predicament. That evening just before a glorious sunset, I decided to head out to the spot for a few hours with a nice flask of Hot Chocolate. First, a few Black-Backed Jackals were hanging around and then the beautiful, mesmerizing sunset set the calming atmosphere. It was time for the wait of hopefully a Leopard or Brown Hyena. After a few hours under the twinkling Southern nightskies, and no luck, I decided to call it a night. It was like a child awaiting Santa on Christmas Eve, but never gets to see him… 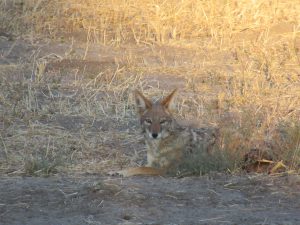 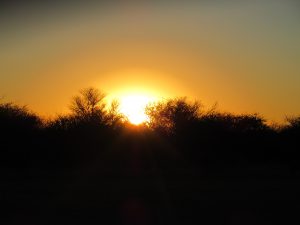 The next morning, I decided to head back to the Blue Wildebeest. While approaching the site, my face lit up like a little child discovering the presents under the tree on Christmas morning. The biggest gift was awaiting me. A beautiful, pristine Leopard was feeding on the carcass! I still cannot stop smiling at the thought. Almost an hour later, of one of the best sightings in my life, I decided to leave her so that she can continue feeding on this Christmas Buffet. Not that my presence bothered her at all, she was having a feast the whole time. 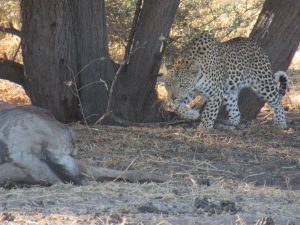 How I wish you were here to share this… Even in these difficult times we must remember that there is always something to be grateful for. Whether it is family, friends, health, or even just a lovely breakfast. Share your love, cherish, care and give, and you will find happiness! And like Dr. Seuss said: ¨Christmas will always be as long as we stand heart to heart and hand in hand.¨ Let us take hands, share our hearts and be brave in extremes, like the animals of the Kalahari!

Keep well and safe till next time