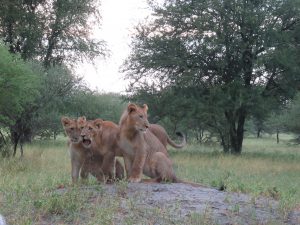 ¨Even the bravest of creatures have fears,


but it is not enough to stop them from

moving on the paths they are destined

Every single person across the globe starts their day differently. For most, it is a steaming, aromatic cup of coffee, some get in an early morning workout and some are catching up on the news. One might prefer the radio, another the television or you might love the old smell and feel of the classic newspaper. In the Kalahari, we follow a similar routine during the invigorating sunrise. Though our sources of news are a bit different here. We have the radio in the form of early morning birdsong, Jackals crying and Lions roaring, so you will have a good idea of what is still around. Sometimes, we even get lucky enough to watch the ¨Bush Television¨, and what a magical news bulletin it is indeed!! The past weekend, the main topic were the Lions and plenty of Wildebeest. Then, when walking around the lodge area, you can read the Kalahari Daily News. The tracks reveal all the mysterious individuals and activities that occurred during the night.

With humanity´s news bulletins and articles being dominated by the Covid-19 fiasco at the moment, Deception Valley Lodge´s news was ruled by the Predators that have been active. Even though Covid- 19 is a predator in itself, we would like to rather affiliate ourselves with the good and natural predators. A much more positive topic, but a valuable lesson to us as humans during these uncertain times. What might the valuable lesson be? To act like the predators of nature by being BRAVE, STRONG AND FULL OF HOPE AND COURAGE!! 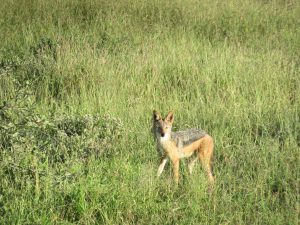 During the last two weeks, the lodge area was extremely quiet, due to a ¨lockdown¨ period. The animals on the other hand, were having a blast with the peaceful surroundings, and made their frequent appearance. Many tracks of Leopard, Black-backed Jackal, Lion, Brown Hyena and Genet have been found around and on the walkways. These are the majestic, yet shy nighttime creatures. However, we can´t really classify the lions as shy. Especially not the inquisitive cubs, that once again got intrigued by the building materials, more specifically, uninstalled electric cables, plumbing pipes and paint brushes. I guess that since most of the contractors went home, they tried to give a helping hand, but somehow, I wouldn´t quite trust the electrical and plumbing skills of a lion! 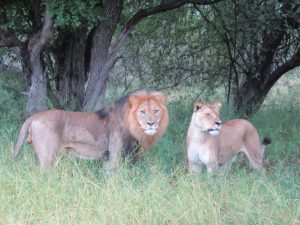 Our resident male, Blondie, also started mating again, and has been rather vocal about it. His mane is also getting darker, a prominent characteristic of the Kalahari lions. This might be due to increased levels of testosterone. The current cubs are almost a year old, so hopefully we can expect younger siblings for them soon. Mating in lions is a very intense affair. A pair will mate approximately every 20 minutes for 4 days and nights, each about lasting 1 minute. Lions have a low fertility rate and a very small percentage of mating results in conception. In fact, for every cub reaching 1 year old, the parents would have mated approximately 3000 times. The protracted copulations serve two functions. Firstly, they stimulate the female to ovulate and, secondly, they provide the opportunity to confuse paternity. The male that begins mating with a female may become so exhausted by day 3 or 4 that another of the coalition members will take over. Since both believe the cubs to be his, both have a vested interest in protecting the offspring. Male lions have barbed penises and the extraction is extremely painful. The neck-biting and snarling that take place during mating are ritualised.

With all the spirit draining news happening, we sometimes need a spiritual deep clean. At the conservancy we have been so blessed in receiving more rain, which was a cleansing ritual in its own manner. In one afternoon alone we received about 40mm. To date, the rainfall for the season is estimated at 450mm!! The grass layer is still bright green and plentiful, and the most delicate flowers, remind us that even the flora are warriors in this usual hostile environment. It looks like paradise!! A place where you can go sit under a tree, unwind, and drift away to pure bliss and serenity. After the glorious, yet intimidating storm, with its hail, harsh winds and drowning downpour, everything opened up and came out from their hiding places. Impalas, Gemsbok (Oryx), Blue- Wildebeest, Zebra, Warthogs and Steenbok were all in front of the lodge at once. All of a sudden, the waterhole in front of the lodge looked like a big pan. Another hidden pan, by the Valley side almost looked like a small dam. Never could one imagine that the dry Kalahari could host amazing waterbirds like the Red-billed Teal, with the cutest little ones following their mother over the smooth surface. Also ,the graceful Black-winged Stilt, surprised us, as according to books, it occurs in marsh areas. Just come to show, nature has its own way in doing things. 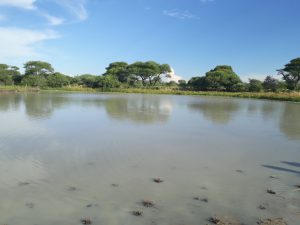 Even the insects got excited about the rain. Continuously, I have a Katydid, Grasshopper, Praying Mantis or Stick insect, trying to cuddle up with me in the office or like now, trying to give their input in the newsletter. Deception Valley Lodge is an intense, glowing paradise of hope at the moment and these small things are what we should live for now.

We would like to urge everyone during this time to be like nature´s predators. Be like the Leopard in the sense of keeping isolated, to yourself and humble. But, be like both the Leopard, Brown Hyena and Lion in protecting your territory. The negative predator, named Covid-19, will not be tolerated in our territory. Sooner rather than later, we will defeat it and reign over our countries again like the majestic Lion rules over the African Plains. Be like the Lion in that you value family time, get to know each other better and practice the unconditional love between a mother and cub. Be intrigued like a cub by the small things in life, and learn to appreciate the things that so often during our rushed life’s, we tend to ignore or overlook. Give yourself a spiritual deep clean, pay attention to your own needs, since we often let ourselves go, and don´t realise what we as individuals need. 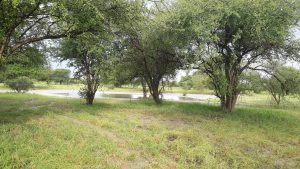 Use this time to grow from a fragile little lion cub to a strong, brave Kalahari Lion. They are fighting since they are little, and therefor they are not only survivors, but WARRIORS!!

And remember: COMEBACK IS ALWAYS BETTER THAN THE SETBACK!!

Stay safe, take care and our love and thoughts are with you.